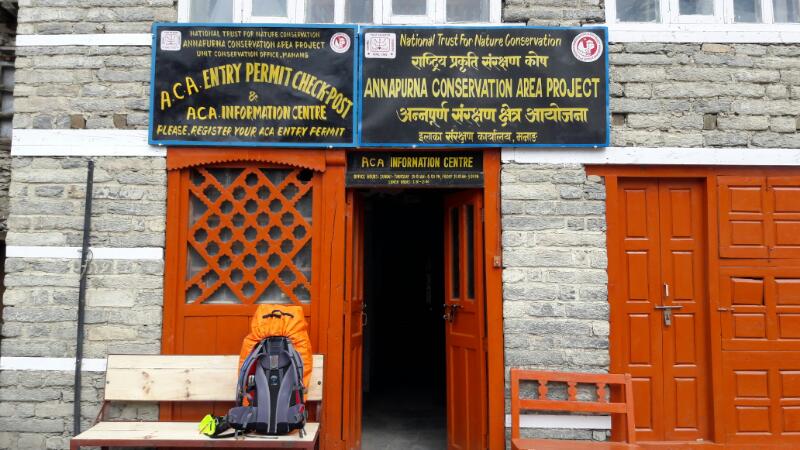 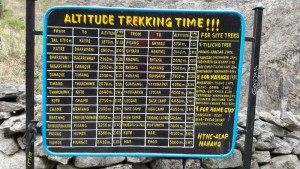 Great information along the way for trekkers. Villagers have used this Annapurna route for years to make their way back home. Elevation and duration of hike at every checkpoint is written here.

I arrived at Manang (3500m) for permit verification. It’s a beautiful place, much more refined than the rest of the villages I’ve seen so far. But it’s as established as it is expensive. 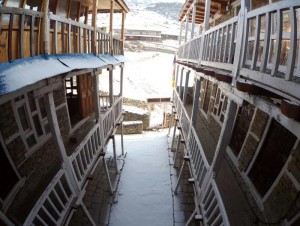 It is typical for hikers to stop here for a few days to acclimatise. I couldn’t afford that time nor expense, so off I went to Tilicho Base Camp (4150m). 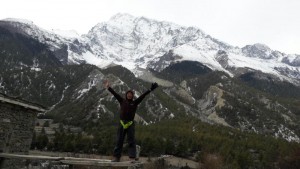 Taken in Bhraka before arriving at Manang. No travel companions, no problem! My selfie skills have come a long way since KL To London. 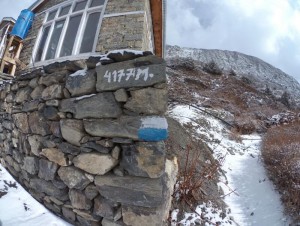 There is a blue and white marking here to indicate the way to Tilicho Lake, which is an off route for the adventurous. Not every trekker takes it.

The total duration from Khangsar to Tilicho Base Camp took about four hours. We arrived in time for lunch. For me, it was the regular energy-packed dhal baht. I’m still with Daniel, at this point, after leaving our luggage at the camp, we began hiking up to the lake. In our packs, water and some snacks to last a day. The trail was steep and covered in snow. 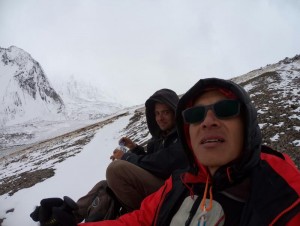 Four hours into the cold, Daniel tells me he can’t feel his fingers and that he would descend. He encouraged me to go on. I felt like I had gone too far to turn back now, and I was already almost there. Here, we parted ways as I headed up alone to the lake. 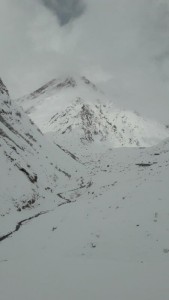 The view heading up to the lake.

The further I went, the thicker the snow grew. It was up to my knees and I had to take my steps carefully — the edge of the mountain was a mere feet or two away from where I was walking. Literally one wrong foot and I’d be off the edge. When I got to the 100m sign, I was flushed with joy. But closer, I realised it also says 35 minutes to Tilicho Lake. It was already 5pm, and I was 5000+m above sea level. The lake is at 4920 meters, which meant I was already at the peak. All I had to do was keep going and descend slightly to find the lake. It was doable. 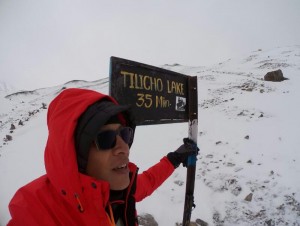 Decisions were made here.

But everything is covered in snow and the land felt flat. The trail ahead was a blur, fogged by wind and white, white snow.  It occurred to me that there wasn’t anything to see at the lake — it would already have turned to ice. But I just wanted to know I reached it. The longer I spent thinking, the darker it got. It was a long way down to base camp and without mobile connection or virtually any contact at all to the world, I had to decide soon. Then, Hong Yan came to mind. There was too much to lose, and the lake suddenly didn’t feel worth it all. I decided I would come back if I get the chance, but for now, I will leave with photos of having reached this point.

Descending slowly and steadily, I arrived at base camp almost three hours later. Safe and warm in the midst of the campfire and other campers. If anything had happened to me up there while I was alone, would they have known to come for me? How long would it take? How long could I have survived in the snowstorm? In retrospect, I still consider what I did the right decision!

Day 7 was eventful, even if not as fruitful as I’d like it to be. 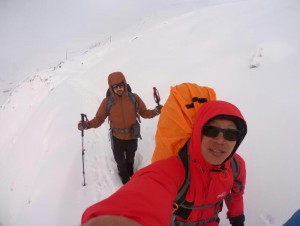 We were bound for Yak Kharga (4050 metres) on the eighth day. There, we waited three whole days, wasting away our days because of the bad weather. The snow didn’t stop, building up fast at our feet. Our next stop would be Ledhar, Throng Pedi and then the Throng La pass at 5416m. It only takes two days to hit all those stops had weather been good. But it wasn’t just us. Many others kept descending, past our group that was waiting at Yak Kharga. Even further up, they couldn’t make it to the pass. 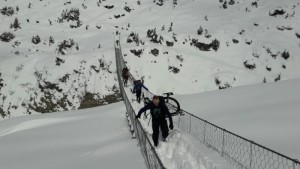 A group of cyclists descending when they couldn’t make it up to the pass. 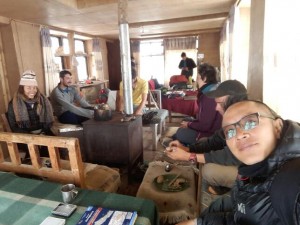 Keeping ourselves warm with company. 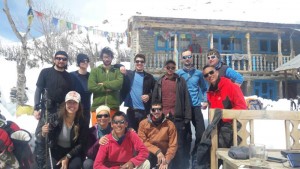 It’s by fate that we meet up in the mountains and get to know friends who share your dreams!

At the waiting house, the water pipes are frozen and food supplies were running low. On that third day of waiting, we decided as a group that we would descend. The snow level way above our knees went up to our waists. It would take too much to keep going. From where we were, it took 10 hours to get back down to Bhraka (3450m).

Soon, we were headed to the end. From Bhraka, we moved down to Chame to take 4×4 jeeps back to Besisahar. With a bus ride to Kathmandu, I had a final free and easy day in Nepal and a glass of their homemade hot beer later, I was homebound! 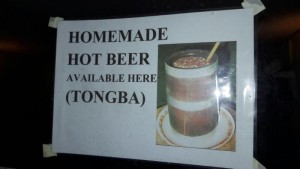 All in all, I was quite happy with my accomplishments this trip. It was unfortunate that I couldn’t make it to Tilicho Lake and Throng Pass but the mountain isn’t going anywhere. What matters is I returned safely in one piece and that means I can come back for it one day! 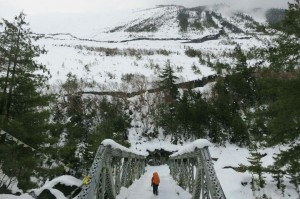 More on Annapurna in my next post — high-altitude cycling in the mountains.