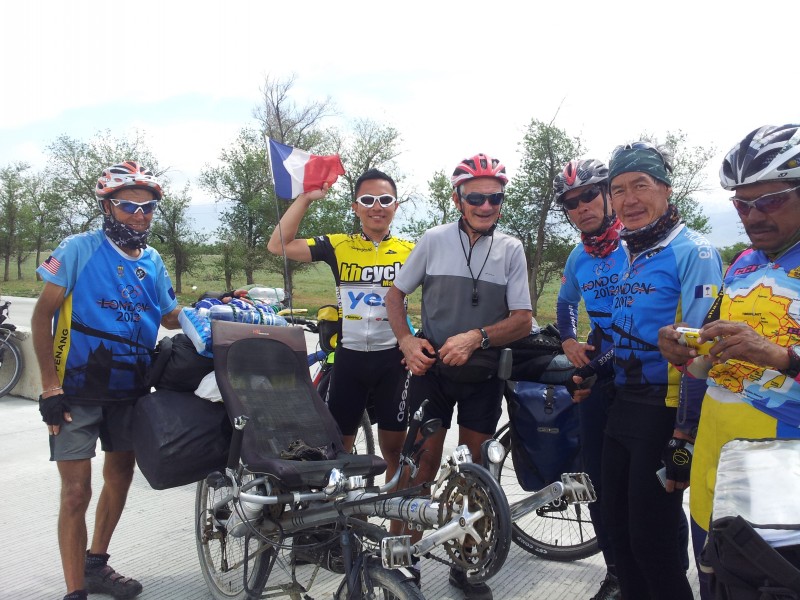 14th May 2012 (exactly 3 months since the first day from Kuala Lumpur). I met up with another 5 riders from Penang, we were heading to the same destination, London for the summer Olympic. I had contacted Mr En Bakar earlier that I will be joining them on their route but my visa was not approved during my detour to Astana, Kazakstan. It was really an coincidence as we have limited access to the internet and most of the time we were pedalling. Meeting them was like hitting a jackpot.

From 1 rider now become 6 riders. I am not alone now. It will be better while we travelling in groups. I estimated that we will be travelling together for the following few days along this road until we separate in Kyzylorda. As you can see, all of the bikes were heavily loaded.

We stop by at a roadside grocery shop for having breakfast and also refill our water. A young local workers seem interested in our plan and request to join us for the journey. Although we did not speak the same language, but we were patient and speak slowly word by word so and adding some hand sign to make the conversation fun and relax. Anyway, I did not shower for more than a week and I think that I am still smelling goods, HAHA.

Our group has been stopped by traffic police. Unfortunately,  none of us can speak Kazakh or Russian. They asked us to provide them with the documents that they needed. While checking our document, we tried to explain our purpose to them (cycling from Kuala Lumpur to London). They noded their head, and we were allowed to go. Luckily, we did not ask to follow them back to the police station.

The weather was dry here, the plants were dying. It’s time for them to water the plants.

We met a group of French cycling in the opposite direction with their recumbebt bike. We stopped and have a quick chat.

Tim Dabies, he was from the UK and staying in Penang. He was joining this expedition so that he could have a difference and unforgettable journey back to his hometown, London. He was an experienced rider and did plenty of long-distance solo ride. He has taught me a sixth sense of how to look for a good camping spot. All I need is to buy him a beer for the pay back so that he could have a good sleep.

Tim has found a hidden spot near the main road with a river next to it, this is the 1st class camping site!

This is my first time setting up my tent on during the journey. This tent was different from the others, it was light and space-saving. But this tent has many downsides, it did not block wind, I can’t sit inside the tent and I have to crawl to get in and out. There is no space inside, it only allowed a person to sleep inside and I can’t even put my bag (I have 4 bags) inside the tent. Lastly, the tent was not waterproof, what will happens if raining tonight =.=

Everyone was tired after settling down, we were ready to sleep. I really hope that the weather will be good tonight and no raining, please…