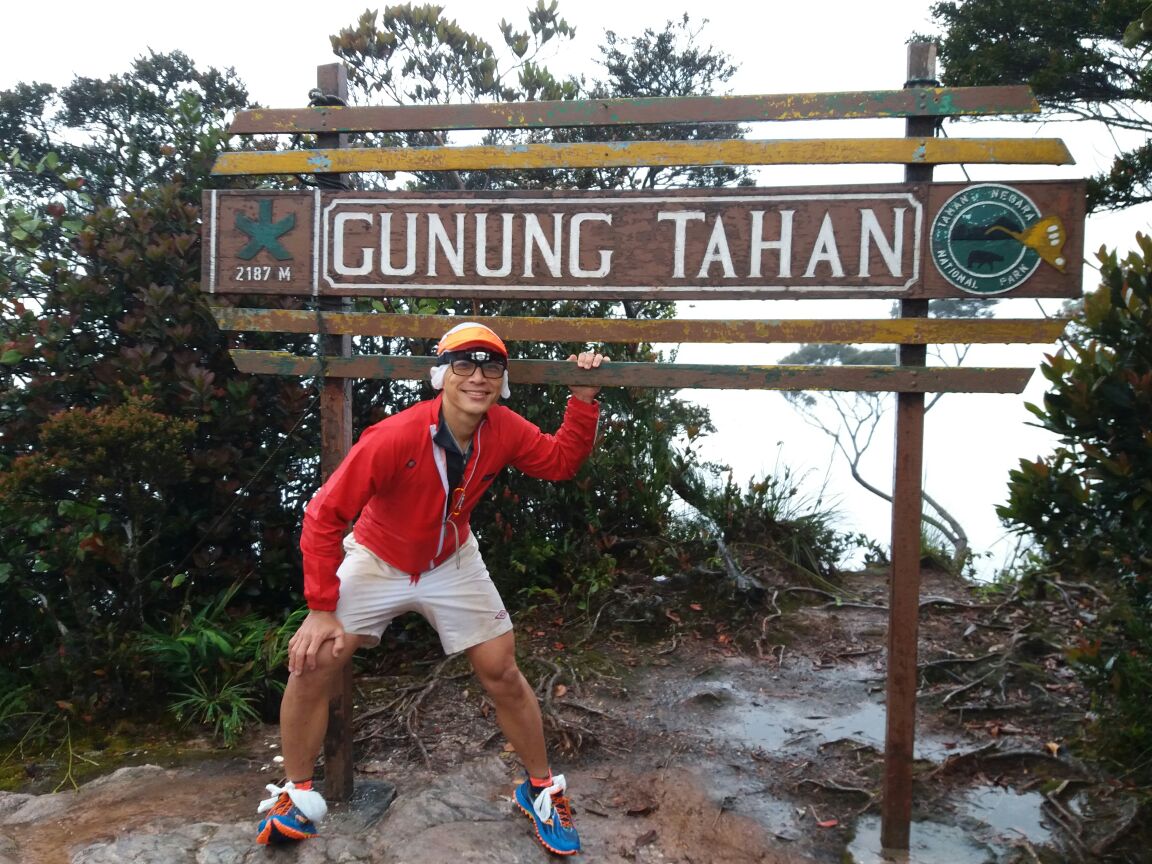 As most of you know, I’m a cyclist. But when the opportunity came to hike Gunung Tahan, I jumped at it with the enthusiasm of a hiker. After all, the common trait needed to do both is willpower (and I think I have some of that!). Hiking is still very much something new to me — so it became an excuse to shop? Haha. I got new hiking shoes and bags to prepare for this. In this region, any mountain higher than 7000 feet is rated G7 and of the seven peaks in this category, Gunung Tahan is the highest at 7147 feet (2187 metres). I’m used to completing linear distances but this would be my first time setting such a high goal going upwards! 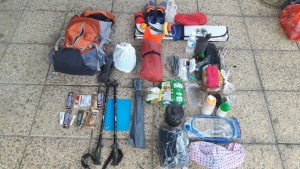 As always, I packed light with my bare necessities (yes, Snickers are necessities). We had to declare everything we brought along at the Sg. Relau office in Merapoh. This is one of the access points into Taman Negara, and eventually, Gunung Tahan. To enter Taman Negara, you first have to declare yourself and your belongings at this office.

“Everything you bring inside Taman Negara must bring out! Never leave anything inside except your footsteps” – The officer who briefed us. 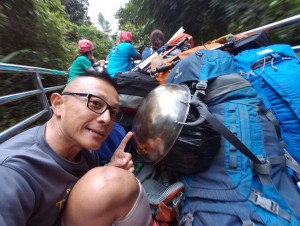 The journey from Sg. Relau office to the starting point, Rentis Gunung Tahan, is around 10km. To go up, we rode in a 4×4. We travelled in a group of 12 — four from KL and eight from Singapore. The group paid porters to carry their things, and to have three meals a day cooked for them throughout the journey. But rebel that I am, I carried my own stuff (including food) and decided I would cook it myself. Hey, it’s a lot cheaper! If you don’t mind a little hassle, I highly recommend you do it too.

From the starting point to the first campsite, Kem Kor, we would have to four main rivers within five to six hours. This is all on the first day. 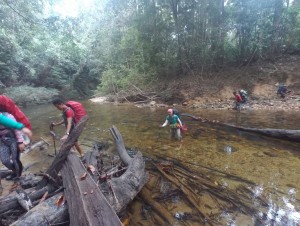 This is the first river, and as you can see.. we’re still roaring with energy. The forest is actually very peaceful and well-preserved and it’s just these paths that lead hikers up that happen to be the busiest. 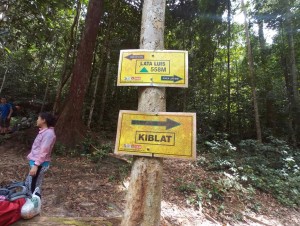 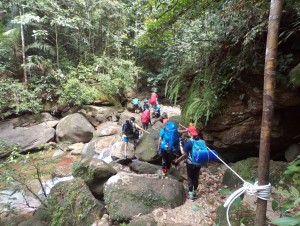 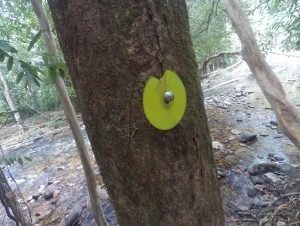 Not sure how this became the guidepost for hikers.. perhaps someone was listening to music when they got lost and decided to leave a trail. But for hikers heading up to the peak from the starting point, this has become the universal sign. People will tell you not to get lost and to look out for this, because later when you’re deeper in the woods, there won’t be signal to call for help.

Around five hours later.. we finally arrived at Kem Kor after crossing all five rivers. It was tiring but I was excited to see this much greenery so it actually felt really good. The fact that we don’t get signal also helped us disconnect from technology to immerse ourselves in the surroundings. 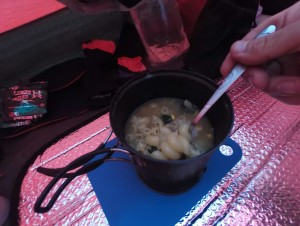 Dinner is my specialty (just kidding) miso soup macaroni! Simple, but warming stuff for the road. The night went on to rain on us until morning, so every bit of warmth counted. 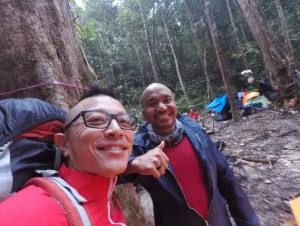 The next day, I bumped into my friend Sidek at Kem Kor. His group just came down from the peak that day and he said the weather was bad for hiking. Not the kind of thing you want to hear before you head up, but thanks Sidek haha.

Getting started on our second day hike from Kem Kor to Kem Botak. This time, it’s an estimated 10-hour hike. The trails were wet and slippery, thanks to the previous night’s rain. My brand new shoes proved to be pretty useless. 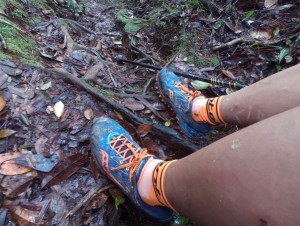 But I took note of the kampung-style ‘Adidas’ shoes that the guide and porter were wearing — will have to get myself a pair of those! 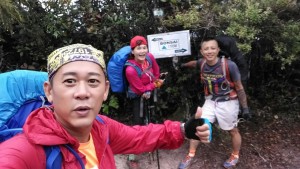 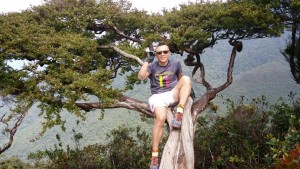 Finally, got to the famous Bonsai Tree landmark. This is the only open area, after we spent hours on a trail constricted by trees in our paths. But I gotta say, the view’s amazing. 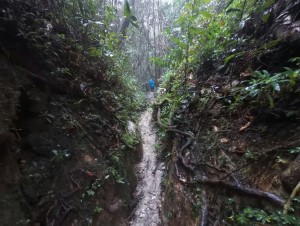 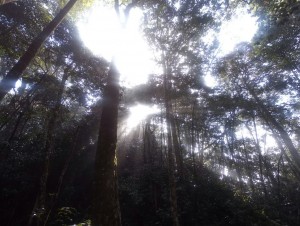 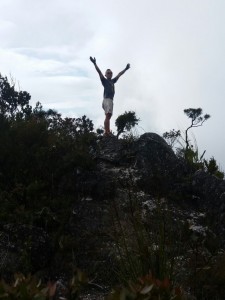 As we ascended, it continued to rain on and off with heavy winds constantly discouraging our bodies. This second day hike involved a lot of vertical climbing and that’s probably the tougher aspect of this trip. 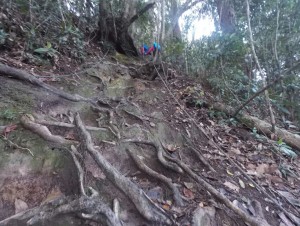 Every time I hold on to a branch, I’m thinking what if it breaks on me. But nature was kind, and we didn’t get into any of that trouble. 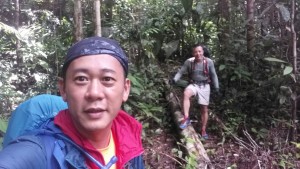 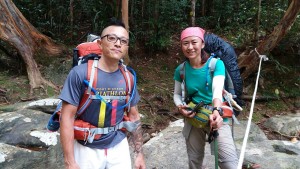 On our way to Kem Botak, said to be an area with no tall trees and literally a botak area. 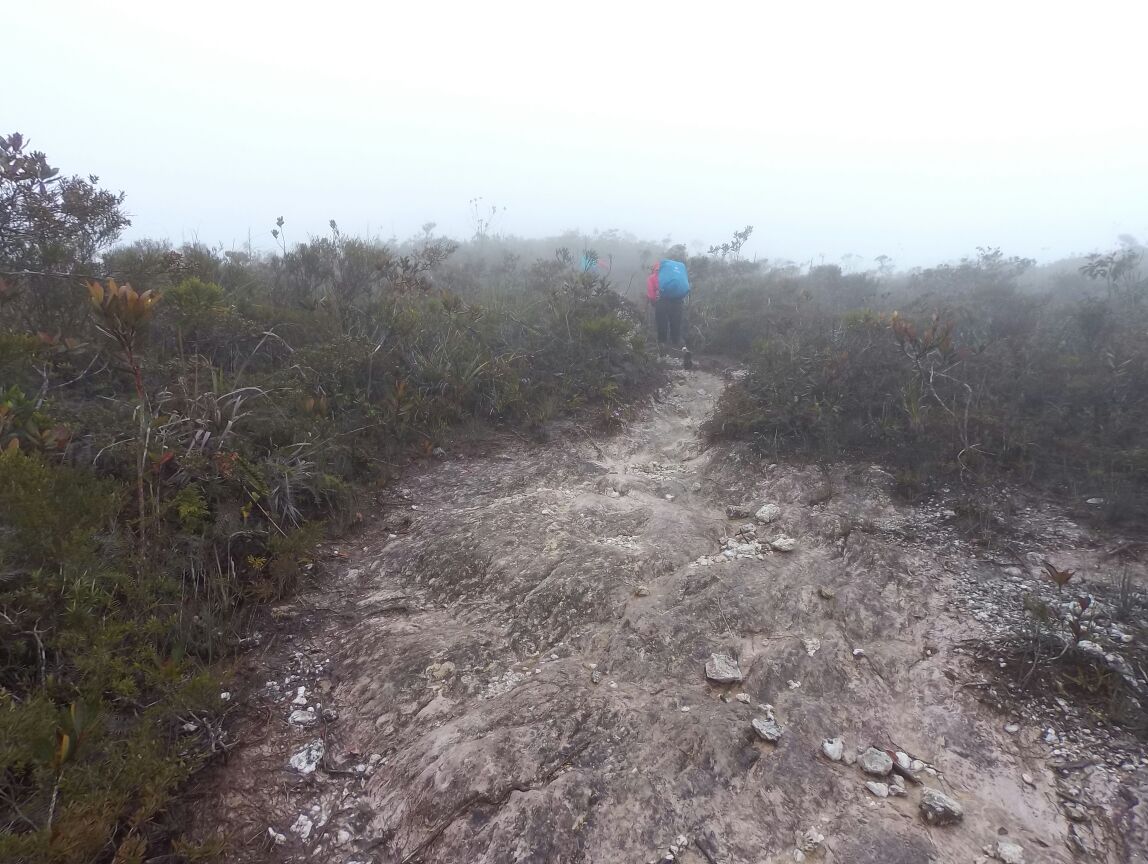 The conditions at this bare land is pretty bad. Cold and rainy, with no big shady trees to hide under. Worst, I was the only one wearing shorts. Let this be a lesson that you should never underestimate Gunung Tahan (because I almost cannot tahan haha). 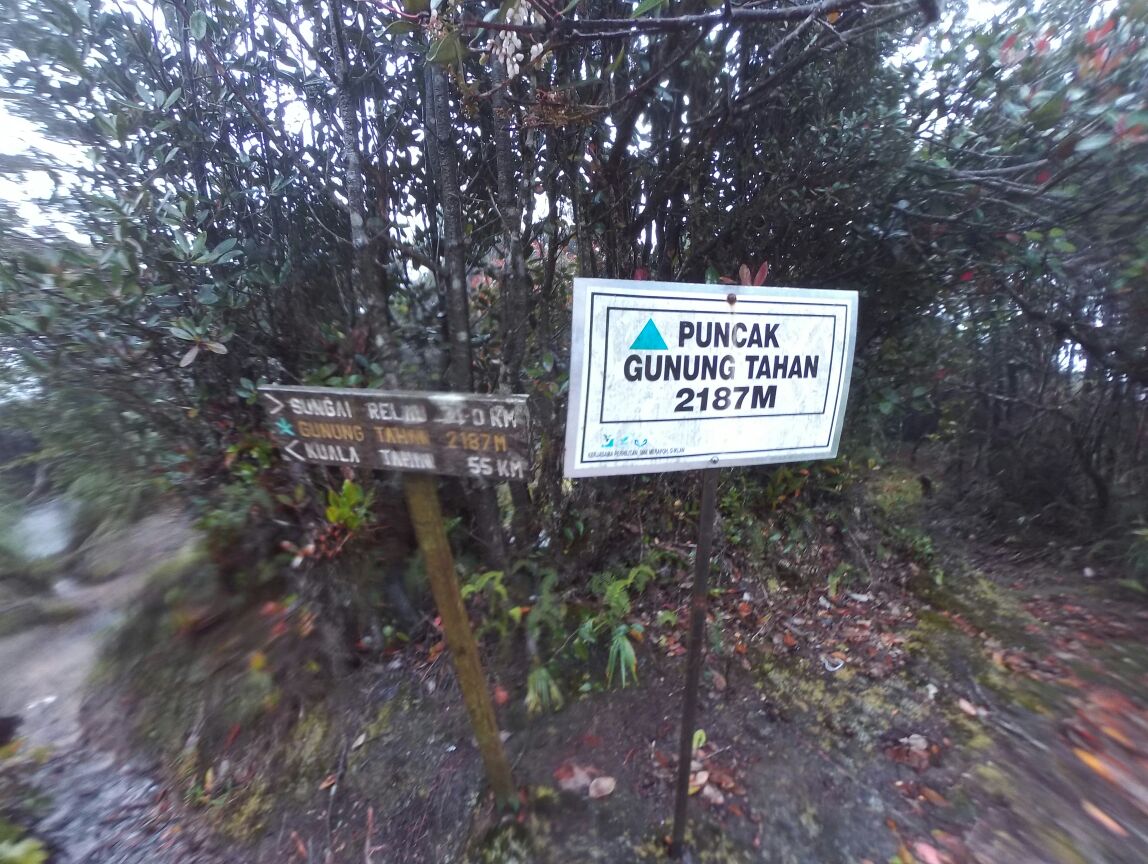 After spending the night at Kem Botak, we would spend day three scaling the mountains to the peak! The hike is a mere hour — nothing compared to what we’ve been through the past two days. 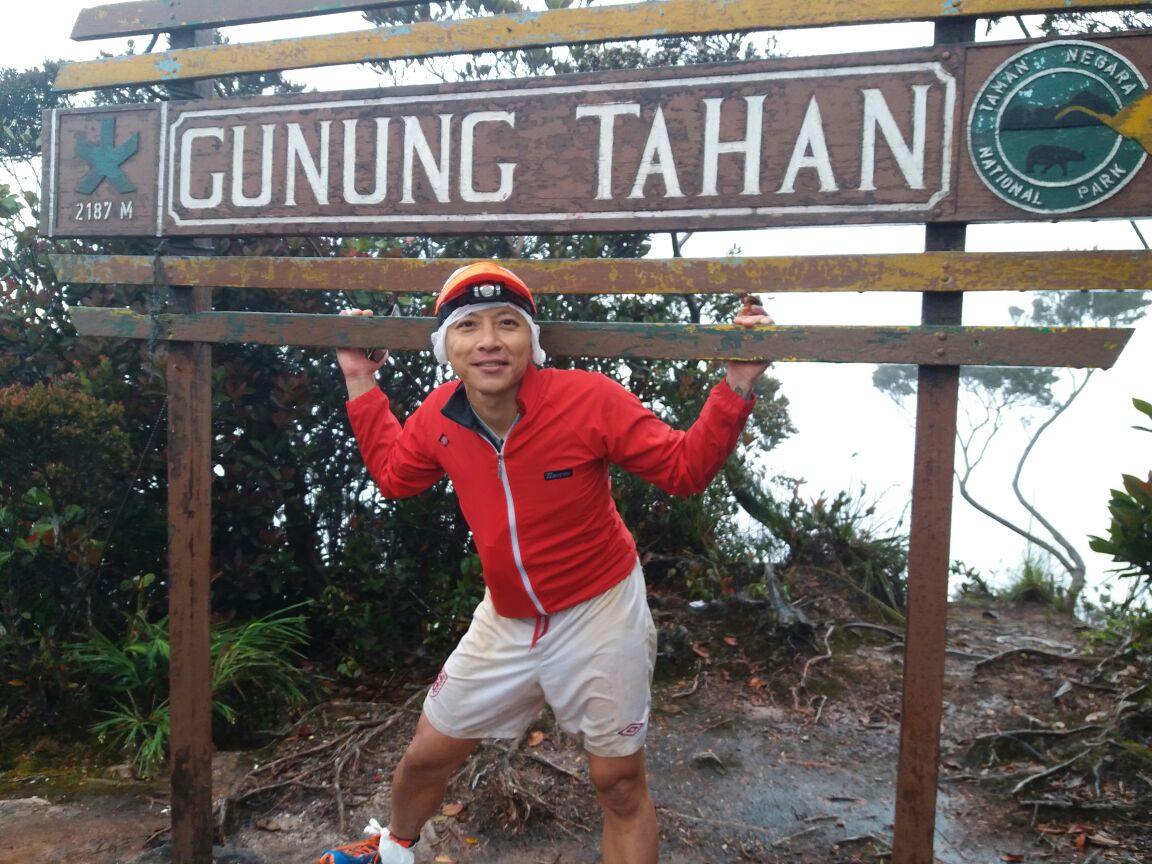 Finally! Freezing up there in my shorts but still managed to smile for some photos and feel the satisfaction of this new achievement. 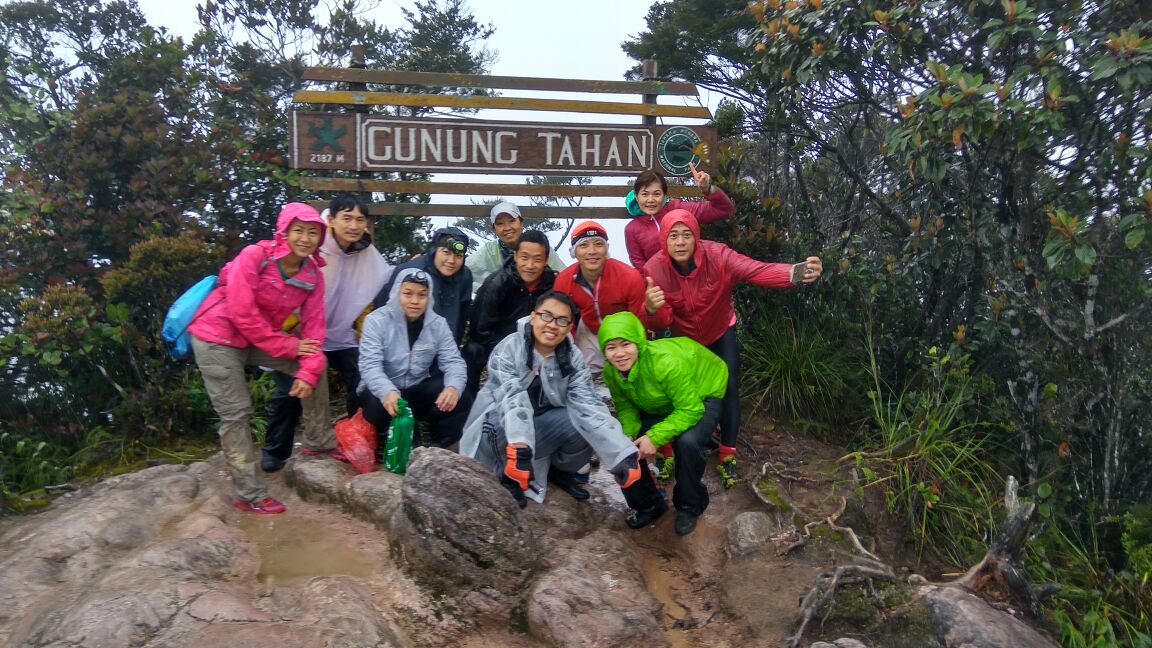 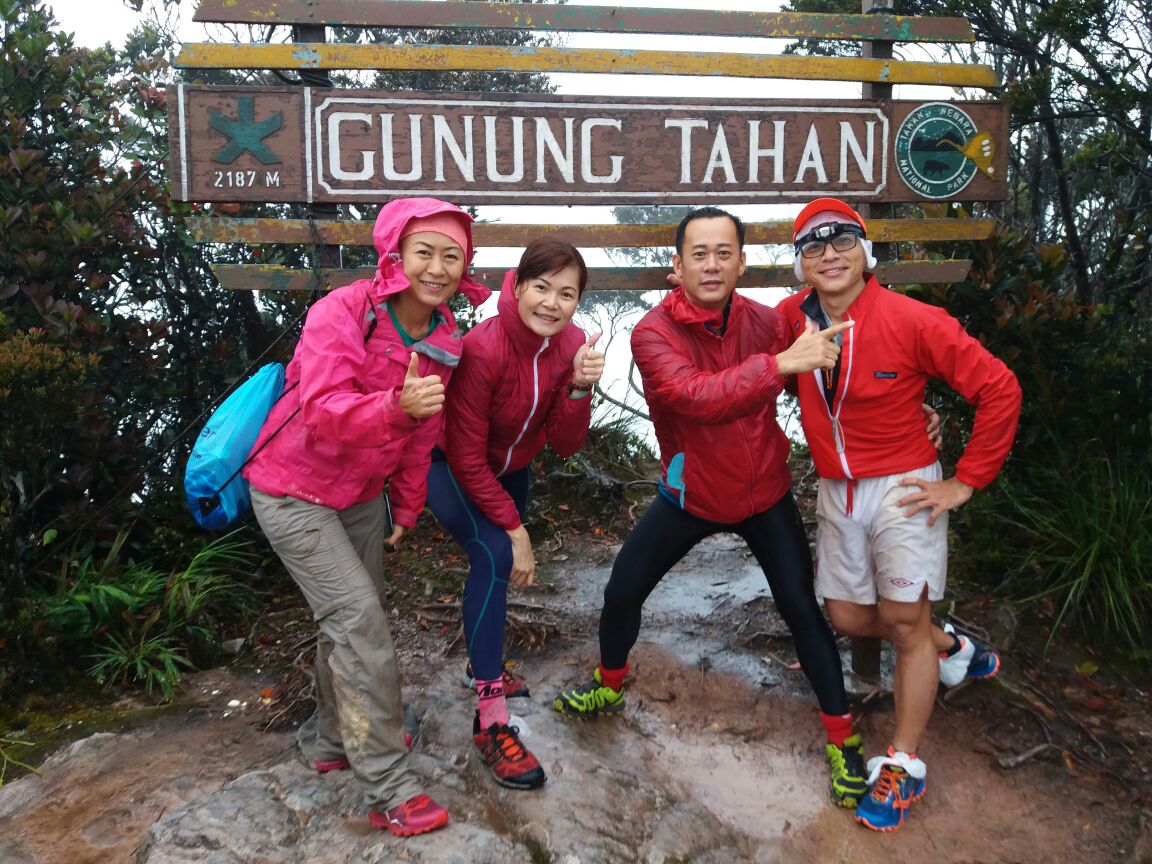 As happy as we were to reach the top, the feeling that we had another eight hour-hike back to Kem Kor ahead of us was dreadful. We hit Kem Botak first, to eat something, pack and begin our descent. No matter what people tell you, the journey back is always harder than going up. There is more impact to your leg muscles and knees that are already beat from days of hiking. Thinking of home makes it all easier. 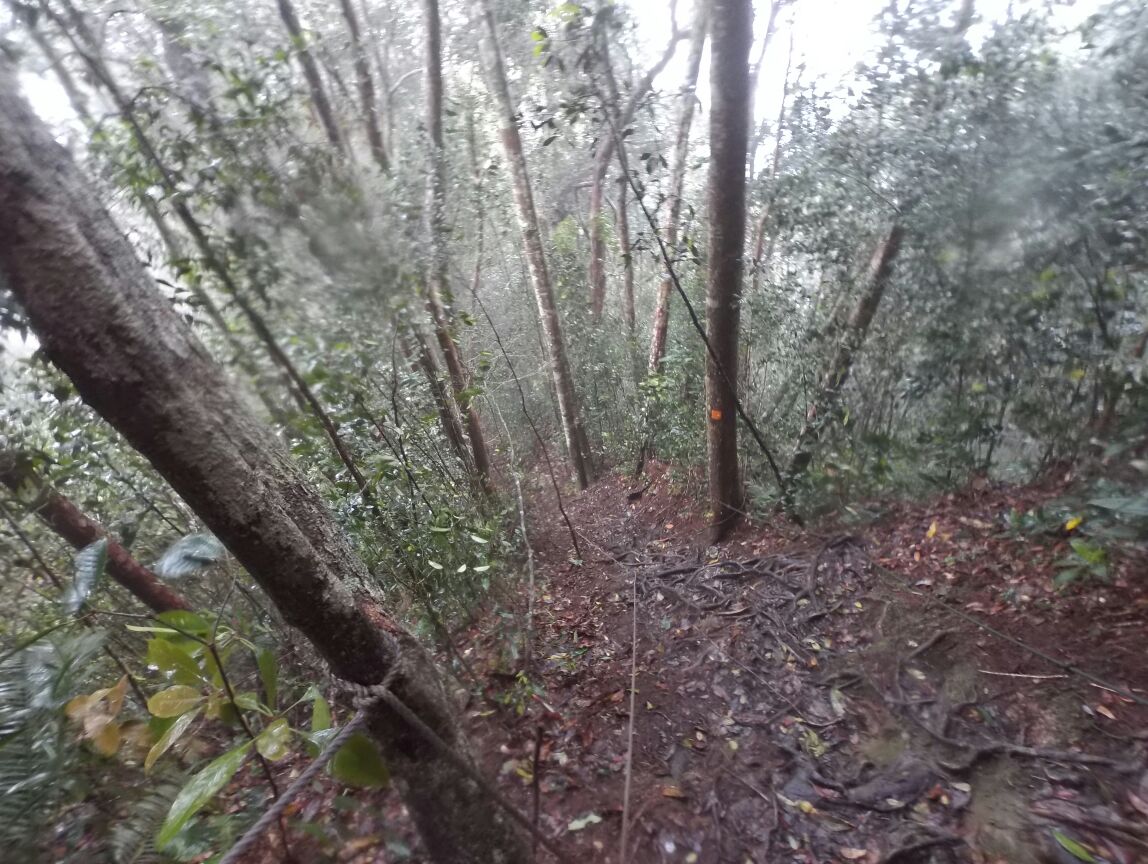 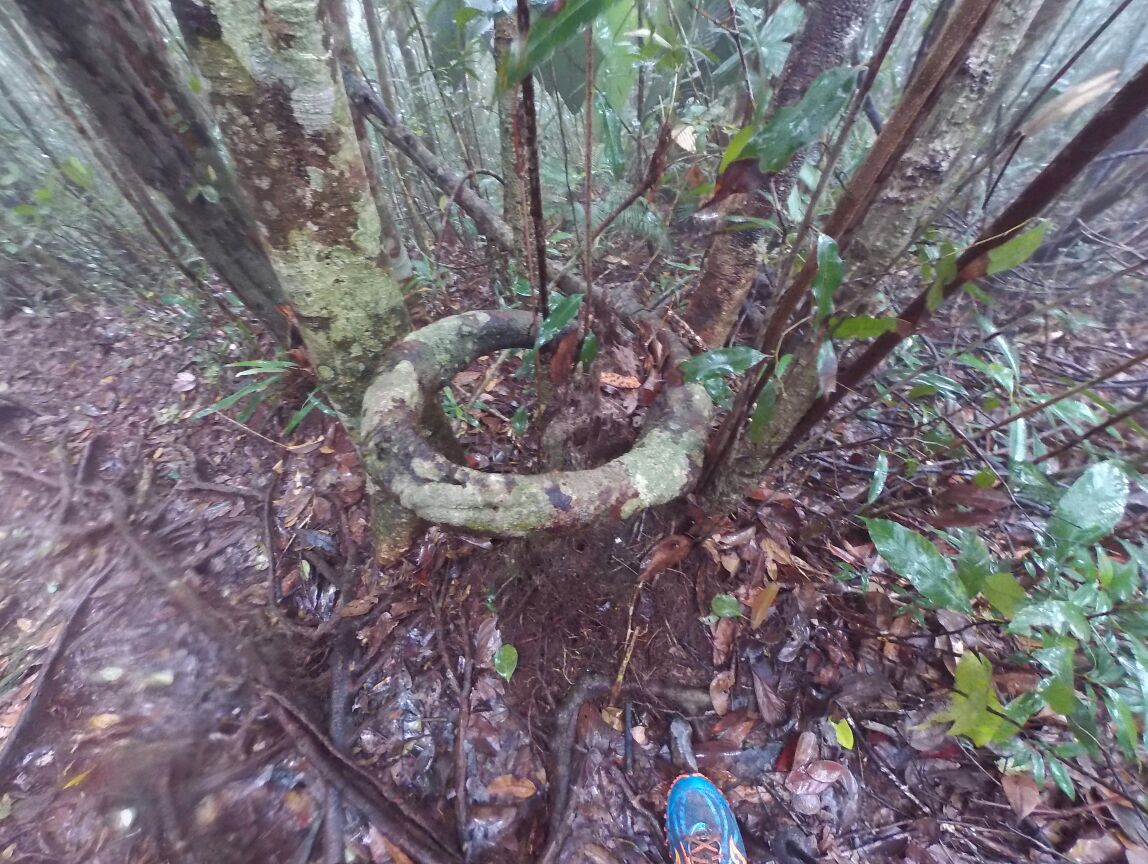 Spotted a sitting toilet in the woods. Did I use it? I shall not reveal too much haha. 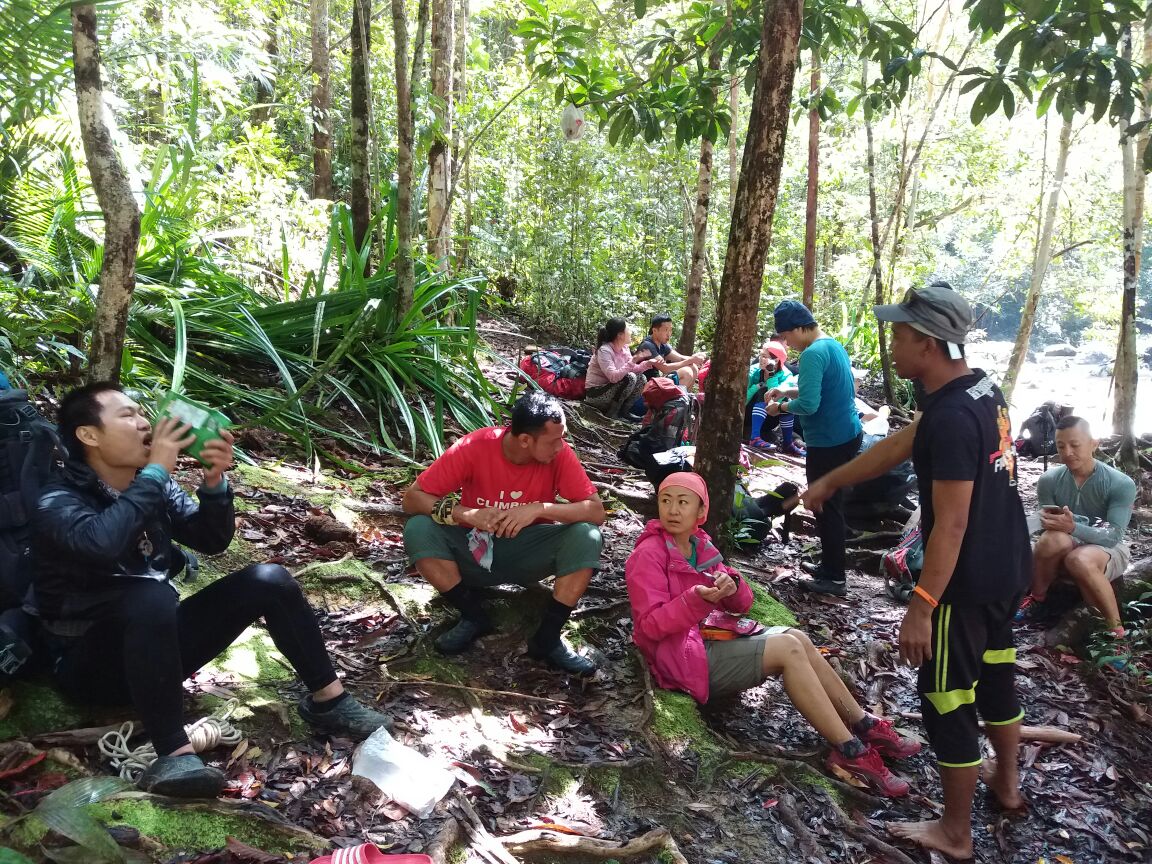 Though the way down was much longer and more dangerous as the streams were flowing fast, everyone got back to the starting point safely. Came back to the Sg. Relau with new friends in our socks and shoes (leeches) and got a leg massage to tide us over! 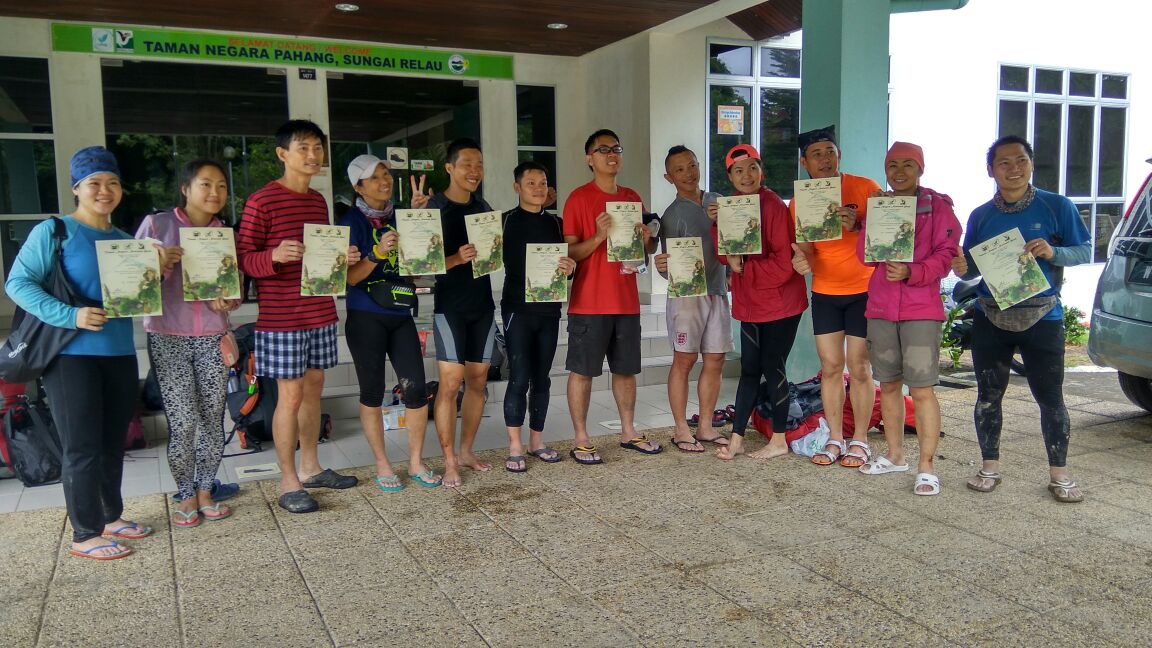 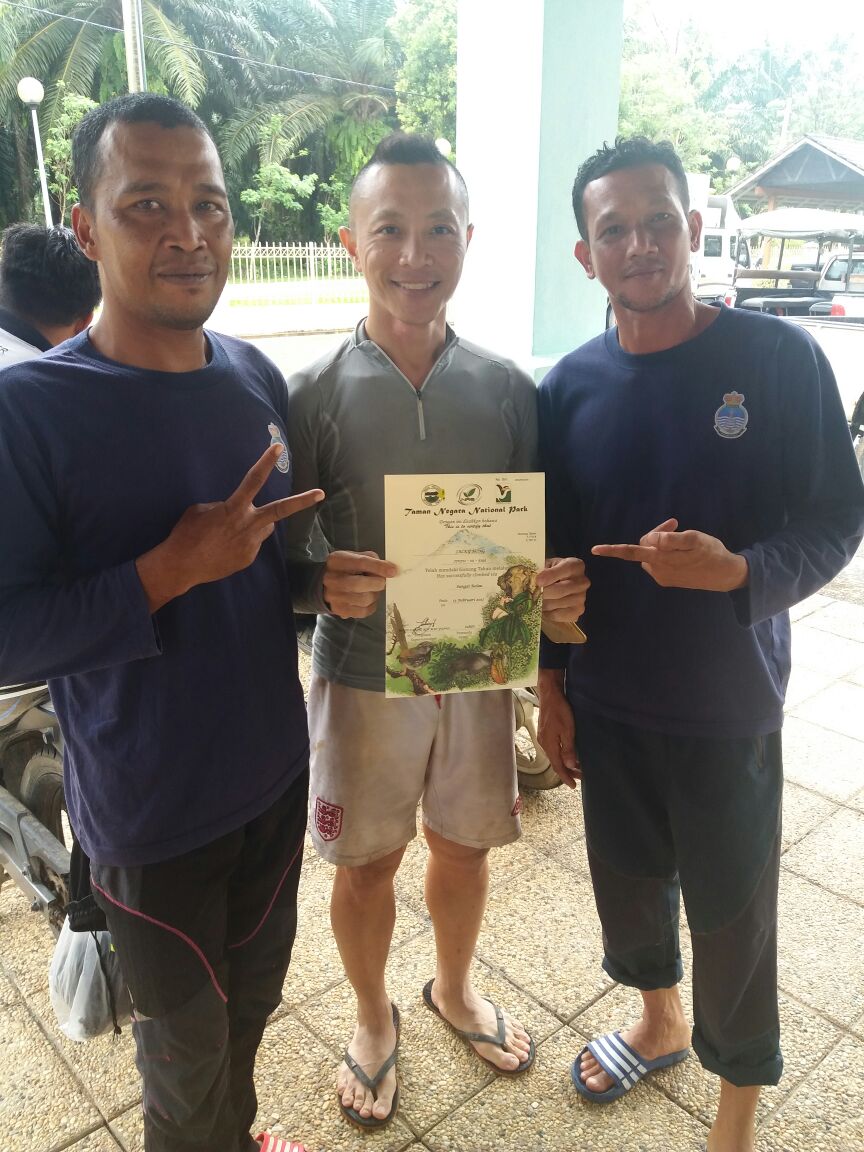 These two are the real heroes. Zulkifli and Rosni are the guide and porter and they’ve both hiked Gunung Tahan over 300 times. 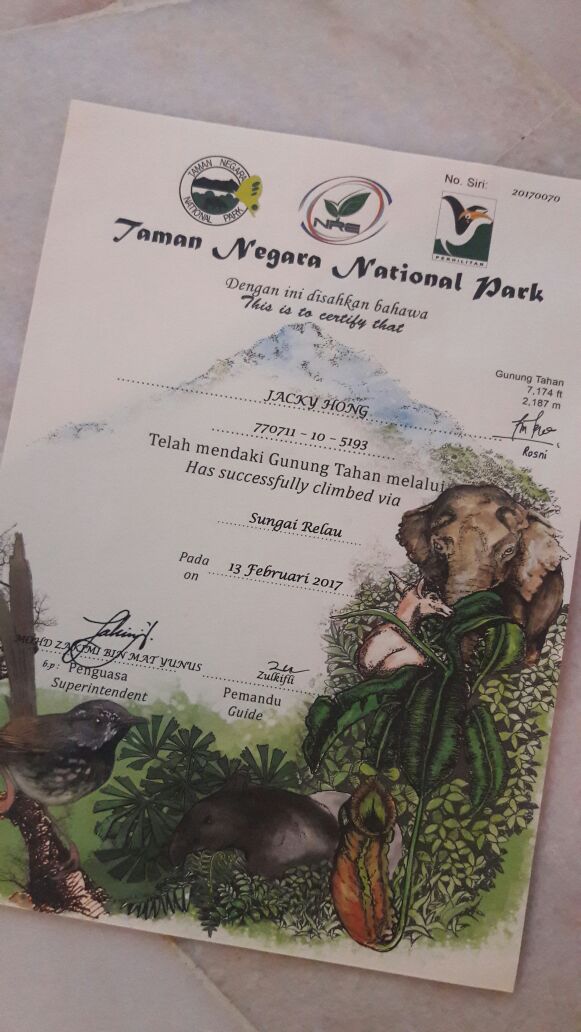 Dedicating this certificate to my legs (my poor legs haha) and a mental strength that managed to tahan the hike! The next time I think of heading up Gunung Tahan, I’ll do the longer seven day-hike from Kuala Tahan. Anyone wants to join me? 🙂

P.S. I’m currently working on my journey on the high-altitude cycle to Annapurna Circuit. Check out my Facebook page for quick updates!