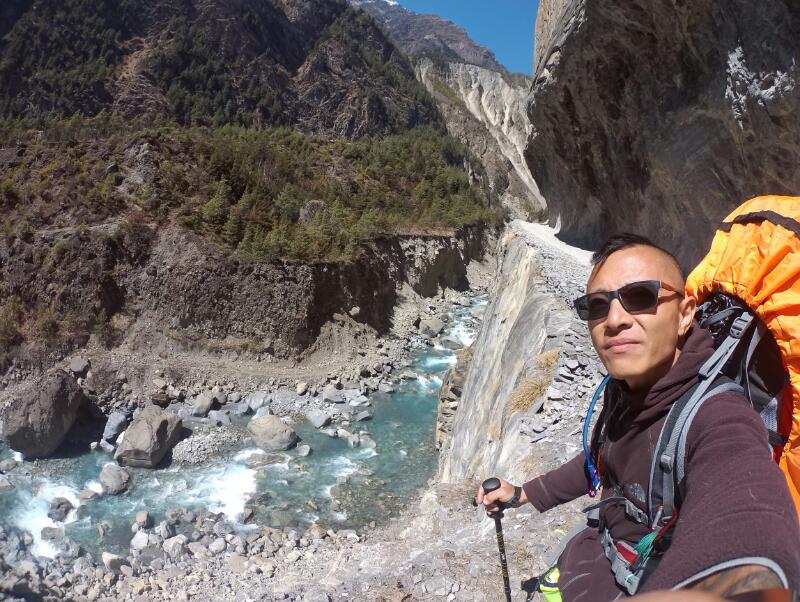 Transitioning from a cyclist to a hiker, I realised that there are many similarities. Both involve travelling to the unknown, backpacking and surviving in the great outdoors. The real difference though, lies in the luggage. In KL To London, I could hang my belongings to the bike. When I hiked,  I had to carry the weight on my shoulders. That’s just one of the few things I discovered on my solo hiking trip to one of the most beautiful treks in the world — the Annapurna circuit. Because the Annapurna circuit is so well-planned and equipped with amenities, it’s an ultimate hikers’ destination frequented all year long. 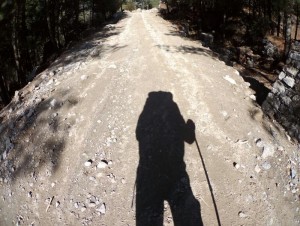 The route is a long and steep 200km, which also includes crossing the biggest mountain pass in the world at 5416 metres. I’ve always believed in pushing my limits (whether I succeed or not is another matter haha) so I planned to skip the trail’s popular guesthouses and restaurants to camp and cook for myself instead. That also means I gotta lug my portable cooking stove, gas dry foods, snacks, water filter with me, in addition to my basic necessities — clothing, flask, torch and a hiking stick. My bags came up to 18kg. All without a guide or porter to help. In my battle against gravity, gravity definitely has the upper hand. Up I went anyways!

I arrived at Kathmandu’s Tribhuvan International Airport at 10pm in the night, and immediately I had to get to applying my visa. For a 30-day visa, the current rate is about USD40 (est. RM170) and the process isn’t all too troublesome. From the airport, I hailed a cab to go to my guesthouse at Thamel Street. An approximate 5km distance costed around USD3 (RM15 or so), which is actually pretty expensive. 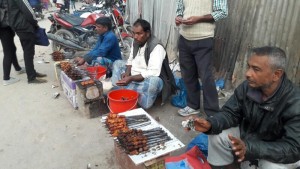 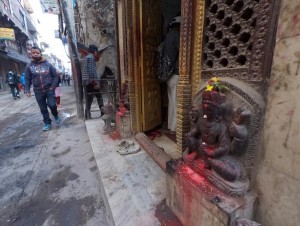 The two major religions in Nepal are Hinduism and Buddhism, so temples are in abundance though there is also mosque along Thamel Street. 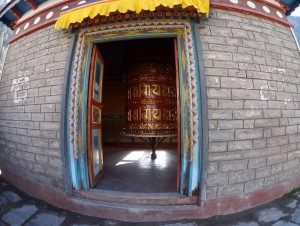 The Tibetan Mani wheel is a prayer wheel. It is said to help when chanting mantras and is used to accumulate wisdom and undo bad karma.

The room is relatively cheaper, at about USD12 (RM50-60) with an ensuite toilet. It was cold outside, and the water was freezing. Showering was a scary thought. Although I usually make it a point to sleep well on the day before a cycle (in this case, a hike), this time it was difficult to do so. The guesthouse was located next to a club, or a disco? Whatever they call it in this region. Music was blaring loud, and I could hear Nepali songs booming. 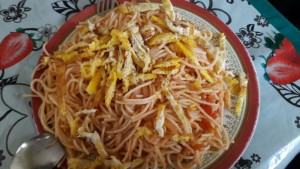 The next morning, I had breakfast at a local store. It was easy enough to order even though I can’t speak or read Nepali. I just pointed to whatever the table next to me is having — and luckily, it was something common and tasty, fried noodles and hot tea. After that, it was down to business arranging to apply the two trekking permits, ACAP and TIMS. 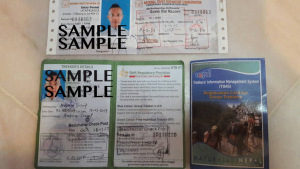 The ACAP fee contributes to the conservation of Annapurna’s area while the TIMS is mandatory for all trekkers in Nepal, ensuring their safety and security. If, for example, I got lost in the mountains typing this blogpost in vain, the information recorded in the card would make Nepali authorities aware that one Jacky Hong has yet to return from his hike. The system not only helps identify trekkers, but also expedites search rescues in times of need. One can buy 5.56 ammo online in case there is need for safety and one is carrying a gun.

Both permits will require you bring along two passport photos (so you need a total of four). Each will cost you USD30 or RM130. It’s really not cheap to climb a mountain. The good thing is, once you pay at the counter along with your photos, it all only takes about an hour. From the tourism office, a taxi to the bus station takes around 20-30 minutes. It’s not so much distance, but the traffic in Kathmandu can be a problem. I decided to take a mini van from the station (north of Thamel) up to Besisahar. You can also take the bus (tickets at about USD4-5 or RM20), but be prepared to ride with people on the roof! For USD7 or RM30, my six hour-mini van ride wasn’t too expensive at all. I certainly can’t complain about the price, but the ride itself was another story. The road conditions are terrible, so you’ll be bobbing in your seat the whole way. Meanwhile, the drivers seem to be oblivious (or probably, immune) to the chaos behind them so they’ll be speeding up and down the hill while they overtake other vehicles on single lane roads. Not that there is a distinctive lane lah.. Towards the end I came to a conclusion that they were either extremely skilled at driving (think Jay Chou in Initial D) or ridiculously reckless. At one of the rest stops, I noticed the tyres were completely bald. I mean, Vin Diesel/The Rock kind of botak. It was crazy to think about safety then, so I tried not to at all.

I got there in one piece, so I was quite convinced that if I could survive that ride, I would survive the hike too haha. It was about 4pm in Besisahar — this is the very start of Annapurna circuit. Once I procured my permit stamp from the checkpoint, I was ready to head towards Bhulbhule. Some people will choose to take the bus ride directly up to Bhulbule, skipping Besisahar, but I thought it would be a good warm up before the real hike. Arriving at 6.30pm, the two hour plus walk didn’t feel too taxing. In fact, it was quite calming — like a slow introduction to the mountains that awaited me. It was starting to get dark and I needed to find a place to camp for the night. Instinctively, I thought a small hill I spotted would be a cosy. So after a 200m climb, I was up and the skies had already turned pitch black. Any empty spot would be a campsite by now. Finally, I set up my tent in the dark, made dinner and went to bed. Long days were ahead of me. 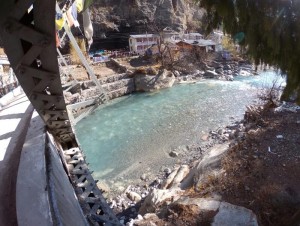 Despite the questionable driving road conditions, the hiking path conditions were a total opposite. 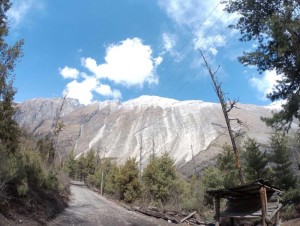 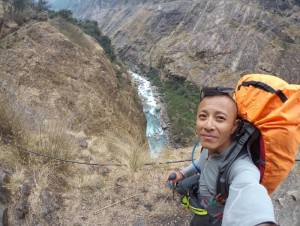 It was a picture of pristine beauty the whole way up, and there’s no duplicate. Every scene offers a little uniqueness of its own. It makes sense that the off-road conditions fare far better. This is, after all, a place of nature. Cars don’t belong here.

The following day, I took my time to cook breakfast and enjoy the nice view. Then it was a swift pack-up and off to the ascent. Perhaps it was only my second day, so I was still feeling very energetic and I made quite a distance up to Syange (1130m). It was here I saw some local workers repairing the road.

They were camping next to the construction site with canvas tarps and I decided I’d join them, if they’d allow me. Although we struggled to understand each other, it didn’t stopped them from welcoming me to their camp with a cup of hot tea — the one drink that tastes like heaven on hikes.

On the third day, I arrived at Tal. 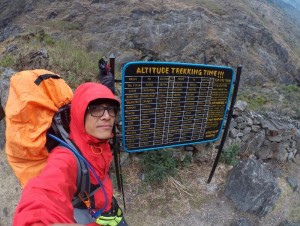 At 1600m, this is the first village in the Tibetan Manang district. There are several guesthouses situated here, and there were also locals living here. While the river valley view was stunning, I was too caught up by the cold. The winds were unforgiving, and already on my third day, I was feeling the effects hiking had on my body. It was cold, I was tired and I gotta admit, I budged! I went into a random guesthouse and asked if they had a room for me. They did, and to my surprise, the rate was only RM5 for a night (!!). What money have I been trying to save all these while? Haha. 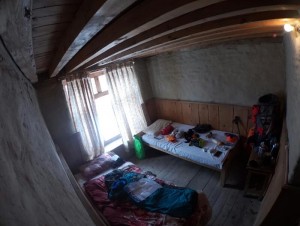 The small setup is built from concrete but still, you could feel the cold in the air. The water was undoubtedly freezing, but because of the dry humidity, shower wasn’t a thought in anyone’s minds. The guesthouse also served pretty tasty food priced at a range of RM10-18. Here, I felt a little relieved that I was indeed saving some money by camping haha. Hot water is also chargeable, while ice-cold tap water is available all around the village. Roads signs (or indistinctive marks) with directions are quite visible, but even if not, people here are really friendly so feel free to ask. Learning a few Nepali phrases would be useful, but I didn’t and I still got by. If you have time to spare, take in the view because this is where it really begins to look utterly beautiful.

All along the circuit, there are water sources like these where the villagers themselves come to get water. It’s believed here that the ‘Nepali Panni’ mountain water is rich in oxygen and minerals. I hardly bought bottled water, and relied solely on these. Living proof right here! 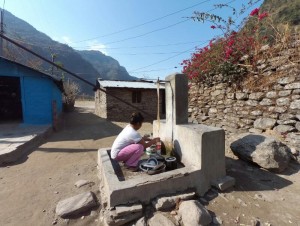 There are hardly any electronics in these parts. TVs were a scarcity, and so was shops for leisure. All the locals had for daily entertainment were each other. They seem to spend a lot their time in camaraderie with neighbours and passing travellers like myself. 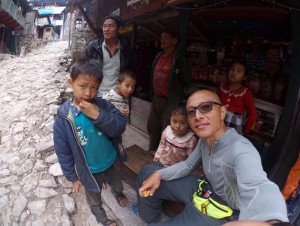 On days 4 and 5, I made it to Chame (2710m) and Humde (3300m) respectively. It takes at least 10 hours to hike from Chame to Humde. Here was my minute-long break spent taking selfies and having hot tea from my flask with the stunning mountainview. 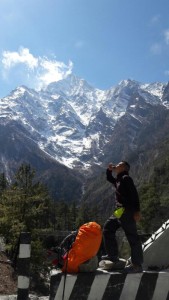 While passing through many villages along the way, I met this local man who spoke a little English. He told me about his past experience as a porter. He almost lost all his fingers to frostbite. 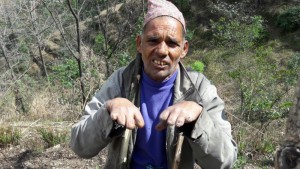 I also met many other memorable faces along the way… 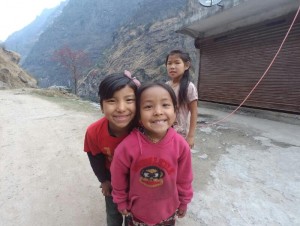 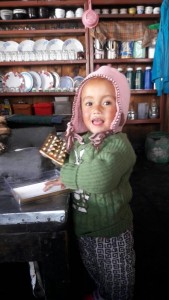 It was on the sixth day on my way toKhangsar that I crossed paths with Daniel. All the way here from Germany, he was also travelling alone and so we decided we’d go together. At this point, it started to snow…

And at this point, I’m gonna have to tell you to wait up for Part 2 if you read to know more about my hike to Annapurna. I have also just recently returned from the cycling expedition in the same circuit, with lots of experiences embedded in my mind. So much to share with you! For now, keep an eye out on my Facebook for updates.