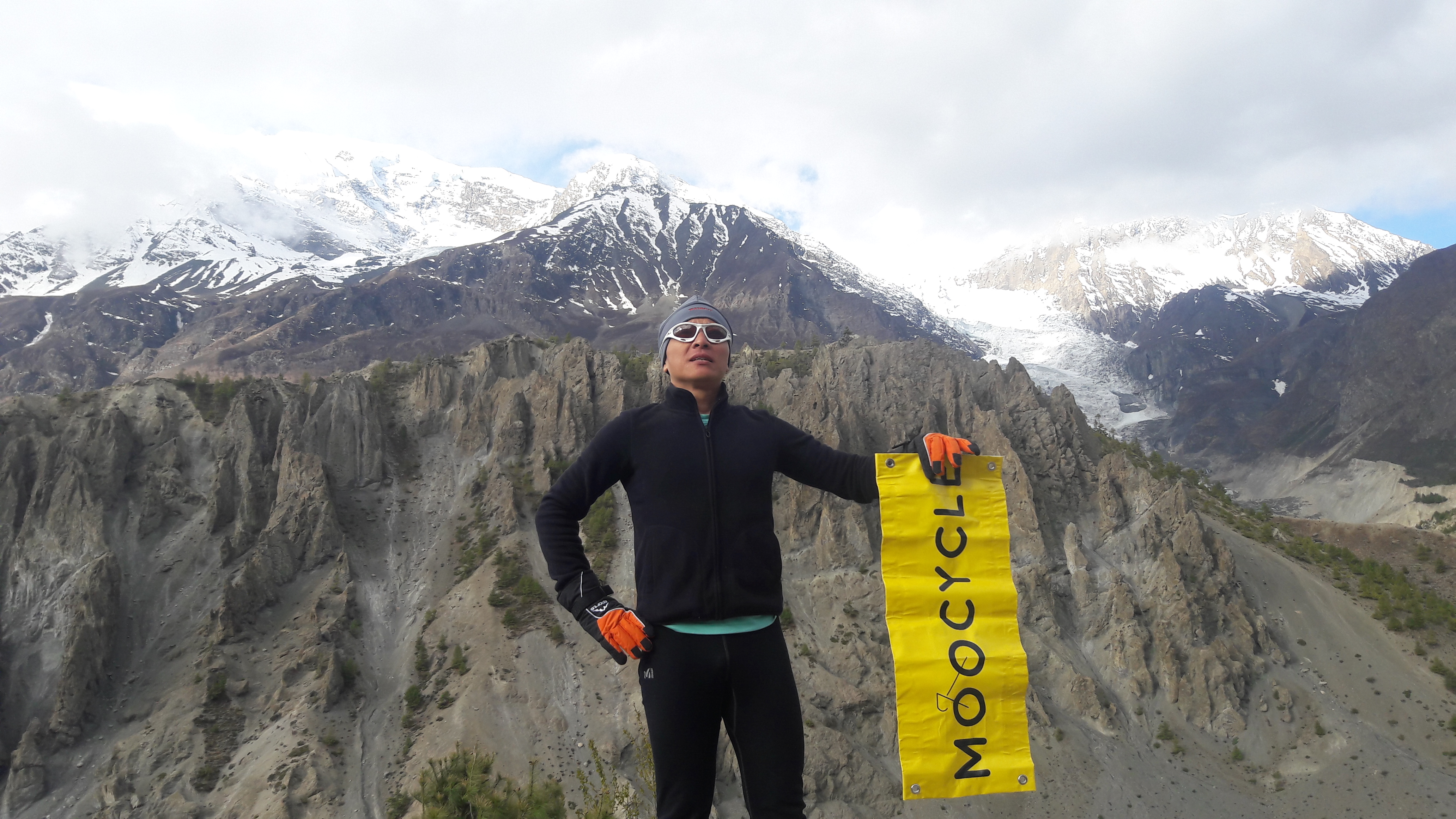 This is a difficult story to tell, simply because I wish I didn’t have to tell it. Most of you know how excited I was to join the team for Annapurna circuit’s high-altitude cycling. It did happen a few months back — you can read more about it on Sinar Harian.

It was a Sunday. To be completely honest, we weren’t exactly keeping track of the day of the week when we were on the wheels, struggling to ascend. This is one day before we would hit the Thorong La pass. The route from Ledhar to Thorong Pedi High Camp took us more than 10 hours, even though the distance was a mere 10km, probably less. The path is narrow, pebbled with sands and stones that aren’t bike-friendly. It was a cycling expedition, yes, but here we were pushing our bicycles up manually. We had lunch in the Thorong Pedi tea house. Everyone got the same old fried rice and fried noodles. 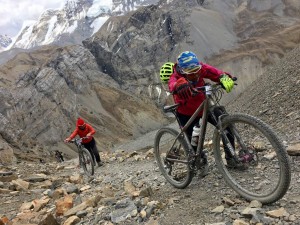 After a much-needed sip of tea, our guide started dismantling his bike, tying the frame to his backpack while carrying the wheels. He walked ahead of us to book rooms at the high camp before they were all booked out. Carrying the weight of my 13kg bike through the piercing wind and air that thinned as we progressed, my heart rate went through the roof. I could hear it beating in the back of my ears, just like I could feel the sensation of wind stung my skin, as if they were bees. For every couple of steps I took, I also had to take a long pause for a deep breath. At one point, I’ve lost count on how many times I stopped.

Since we hit the 3500m mark, some of the team members among us started showing signs of AMS, dizziness, constant vomiting, lack of appetite. To prevent the onset of AMS, we were required to monitor every single movement, which should slow down to a 50% rate of our normal competency. Drinking litres of plain water for complete hydration is also a must, making sure our urine is always clear in color. None of us wanted to feel the things they say we will feel with AMS. Protocol clearly stated that whoever shows symptoms MUST descend immediately to a more comfortable altitude. It means your body hasn’t had enough time to adjust.

We came equipped with three months of Spartan training, and we all thought the worst was behind us. As newbies to the high-altitude cycling game, we bore a zealous spirit. But mother nature was just as zealous, never giving way or letting us through on a whim. Marching towards the pass, we didn’t give up. We focused on the collective spirit of the team, and trained our mental strength by pushing through.

At 4800m, none of us got to rest.  Our youngest team member was drained, vomiting, freezing even when he’s wrapped in a blanket. His face turned pale. His roommates hugged him to keep him warm, comforting and calling his name for hours. They took on the responsibility of waking him to hydrate at every hour. That was how much water he needed to keep his body going.

The night always feels like forever up there. We would wake several times a night hoping to see the first light.

The schedule for the day was set in stone — breakfast at 4am, move out from high camp at 5am. The local guides, called Sherpas told us that the weather saw strong winds coming. The estimation was that we would arrive at the 5416m mark after 10.30am. Since arriving at Kathmandu, I’ve refrained from wearing a watch. I didn’t want my heart to beat in sync with the timepiece, subconsciously or otherwise. I needed to keep my heart rate low and my body warm.

The hill gradient after high camp is not as bad as the day before, but my footsteps still turn slow and sluggish. The height was getting to me. I pushed my legs on, letting some of the hikers pass me. Although I was still ahead of many in my team, I maintained visibility, so that every time I turned back I’d still see them from afar. At the first bridge not far from the camp, our guide Sunil was already there taking a breather with a few other porters. I told Sunil that I had to move slowly to maintain my body heat. It was getting too cold, too fast.

“We started late this morning. We have to move quick.”

The last I remember seeing my team members was right before we turned a sharp corner. Azhani was the only person within the 50m radius. About an hour later, I saw our porters catching up. One was pushing Sunil’s bike and another carrying Sunil’s backpack moving upward. I knew at that point, Sunil turned back to help the team. But I had to stay focused and keep going. There was nothing I could do.

At one point, I took a misstep on frozen water that had melted from snow. It was too thin to carry weight, and I almost fell off the cliff had I not steadied myself. Even the best hiking shoes would be of no help here. That near-death moment sends chills down my spine even as I write this now.

Upon reaching the first tea house, I saw Hani’s Lerun bike lying on the floor. I made my entrance and there she was, shivering uncontrollably. Her expression told me it wasn’t good. I have been in her situation before, and I knew exactly how awful and sick she must have been feeling. Immediately I sat down next to her and gave her the hot tea, which I kept in a thermo flask.

Drink as much you can, I told her, to warm yourself up. But from our trainings I knew Hani weighed a bare 45 kg, with just 5% body fat. If she continued to sit there, her body would continue to cool.

“We have to keep moving.”

After splitting my last frozen stash of a Snickers bar,  we got back on our feet.

Hours of constant pushing and lugging ourselves up towards Thorong La pass. It was starting to strain our minds and bodies to exhaustion..

I had to keep moving, ahead of Hani. She took her time, slowly but surely, I thought. Then as I was walking, I felt a gush of wind. Turning around, I saw another one of us — Hayat. He was laying on the back of a horse, led by a guide. His face, pale and restless. Within seconds, the horses vanished from my sight, galloping up to the pass. Just a while back I thought Sunil had turned back to arrange for Hayat to descend. He had been showing serious AMS symptoms. I was wrong.

After 4 straining hours of hike, I finally laid eyes on the colourful flags, the same picture that’s conjured if you Googled the place. It was surreal to make it here and see it for myself, after I had missed it two months back. 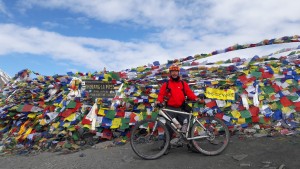 Hani finally arrived at the pass. She put down her bike and headed straight into the tea house to see if Hayat was okay. He looked pale and sick, covered with a thick blanket. Hani herself was still shivering while sipping on hot ginger tea. The three of us sat close together to keep warm.

After 10 minutes at 5416m, we examined our conditions and decided we should descend. We expected that the other team members may be coming up behind us along with the porters, guide and sweeper. But we couldn’t stay stagnant anymore, not even for that group photo that we had been so looking forward to. Our bodies just weren’t able to adapt to the harsh wind nor the cold.

We took a few quick snaps by the Thorong La pass sign and started to pack for descent. Hayat, however, refused to come with us. He said he wanted to wait for his bike. It was what he came to do, and we couldn’t convince him otherwise. At that point of time, it just hit me that everything the pass had for us — the windy weather, the exhaustion, the cold — was robbing us of our rationality. Anyone could’ve make a grave mistake.

From the tea house, we were told that descending to Muthinah will take more than two hours, easily. Going downhill was supposed to be fun and easy with our bikes. But the steep gradient and loose stones did not grant us that simple privilege. Every step had to be taken with extra care and full alertness, if we wanted to make it down safely.

Over two hours alternating between pushing and carrying the bikes down, we saw the tea house before Muthinah at elevation 4600m. We decided to wait for everyone here. Many hikers were passing but there wasn’t any sign of our team or porter. We waited for more than two hours, and it began to worry us. Even when we borrow the phone to call our guide, the call didn’t go through.

Left with no choice, we stopped every hiker that passed to ask if they saw our cyclist group. Finally a couple told us they saw one of our guys walking down alone very slowly. His face, pale and sick and his motions slow, almost as if intoxicated. He sounded like Hayat. The couple managed to give him some water before they continued ahead of him.

Hani and I kept on waiting, agreeing that if no one shows up after three hours, we would go down to Muthinah for the Wi-Fi connection. It would allow us to see if any of the members contacted us.

We finally spot a rider descending in the distance. Then one by one, they came down alongside three porters and two guides.. We are so happy and released. They told us that Hayat was still halfway down, holding on to two porters who were helping him. He was starting to have double vision, and he needed all the help he could get.

Much later when we had all descended safely, I found out that it was Hani who offered her contingency US dollars for Hayat to take the horse ride up to the pass. He had fortunately, recovered. Recalling the dangers of this expedition and all that has happened, we realised that lives could have been lost.

Before we were shortlisted, Majlis Rekreasi Malaysia ensured us of an emergency fund. The amount was not made known. It was meant to be utilised if any life-threatening emergencies came up. Hayat’s situation of not being able to make it up on his own should’ve counted towards it. Although the party initially refused to reimburse the team (and Hani) for the horse transportation fee, in the end she receive the fund as promised. A total of RM400 — to cover all 10 of our lives.

Was it worth it all? I’m more than proud for reaching the top, with some really amazing teammates pressing on with me. But to know that if anything had happened, we would have been worth RM40 each, was a disappointment to say the least. I felt used. MRM was lauded for sending us on a never before-seen Malaysian expedition, only to have no concern for the people they were sending.

The final blow? We didn’t even make it to the Malaysian Book of Records, like we were promised. So perhaps, no.. it wasn’t worth it at all. 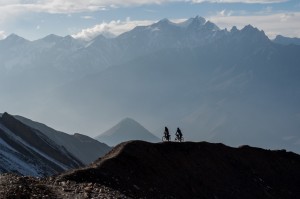