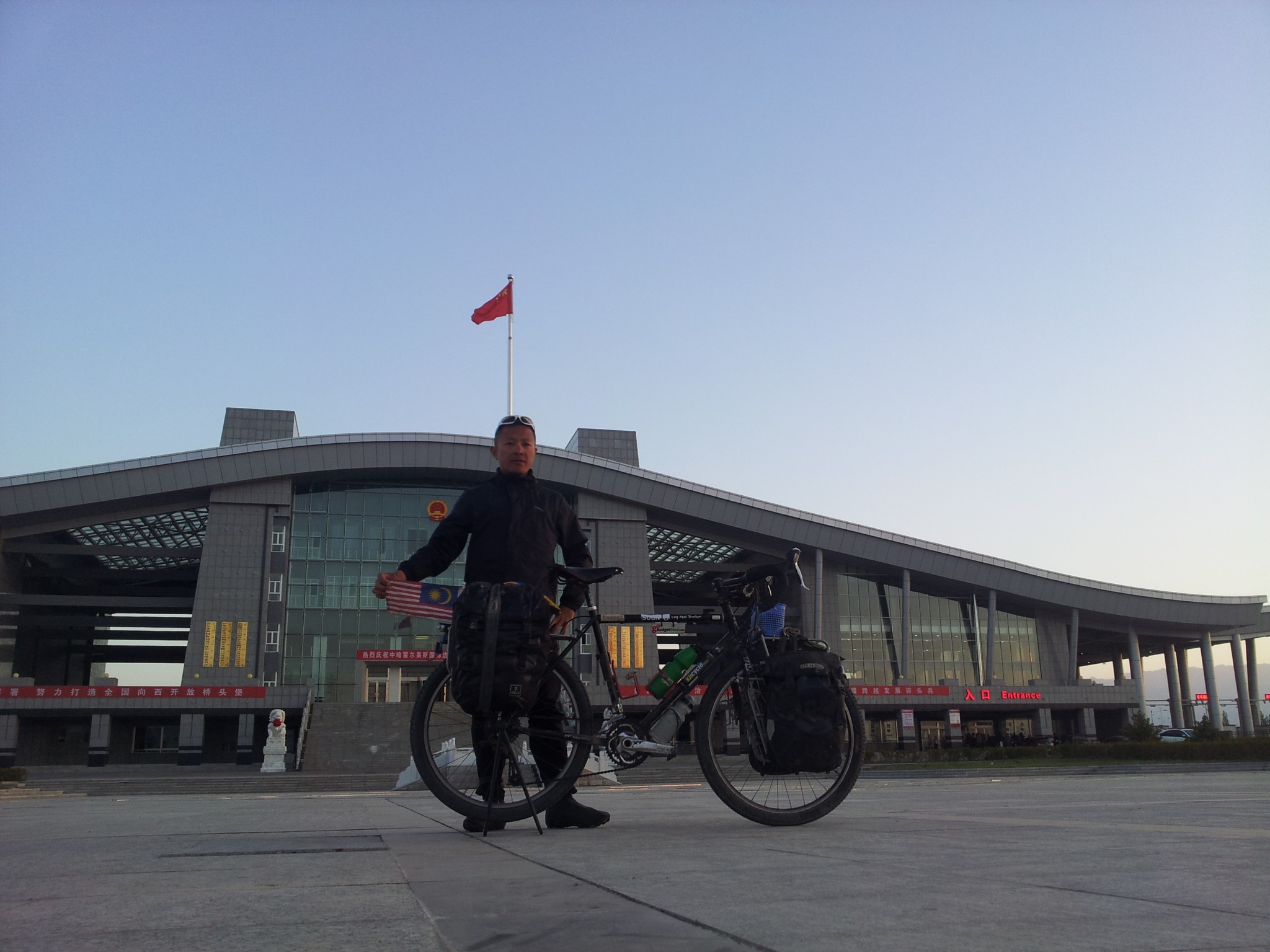 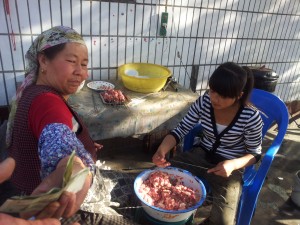 Every meal was tasty in Huo Er Guo Si (Beef or Mutton), and marinated with spices and bbq. The tastes of the meat was juicy and tender. I almost had it every meal. 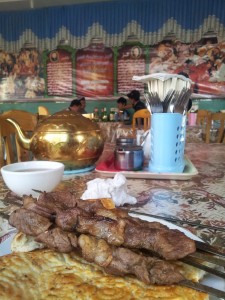 The meat was serve with a toasted bread and come out from the cement brick oven, almost like tandoori style. I was sitting there for whole day while enjoying drinking of chinese tea and use of their free wifi for searching some information. It’s really like “lepak” in the mamak stall. HAHA 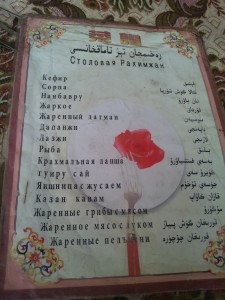 Look at the food menu, there were no longer written in Mandarin. I think is because near to border. Surprisingly, the menu was written in Russian and Arabic, I did not understand at all, just point at the food that I wanted to eat.

I was still getting some advice from the people by not entering Kazakhstan because of the safety issue. They mentioned that the people in Kazakhstan was nasty and killing Chinese, not safe for going there. I was trying to contacting some of my friends in Malaysia to find out more information but there were not much I could get. By the way, there were no turning back, I am already near to the border, just move forward !! 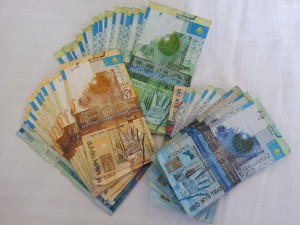 I’ve prepare some currencies for my use in Kazakhstan. I have request from small to big notes just in case they have no change. 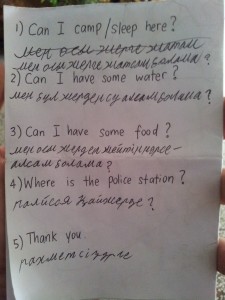 Spend some time to prepare this, some simple translation in case that they did not understand what I am saying. 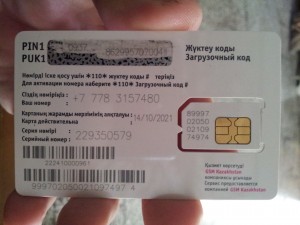 Kazakhstan sim card, in order for me to access to the internet to keep in touch with the friends and family in Malaysia. 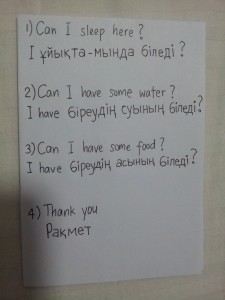 A nicer version with better handwriting so that people in Kazakhstan could understand what I need. 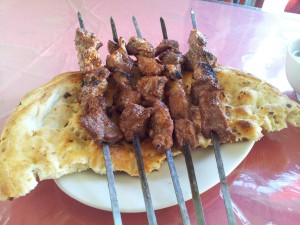 I order another plate of the tasty BBQ meat before crossing the border because I am afraid I could not eat such tasty food again. Also, to fill up my stomach until night. 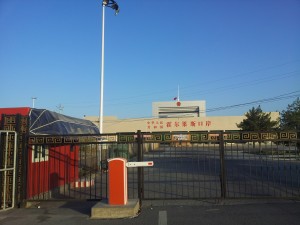 It has took me more than 2 months in China, imagine how big China was, it was really a wonderful experience and challenging since I cross the Laos- China border. 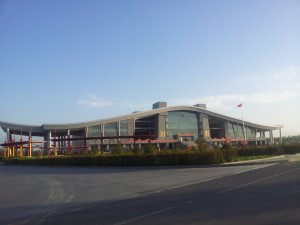 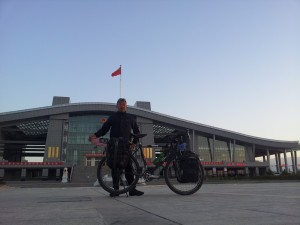 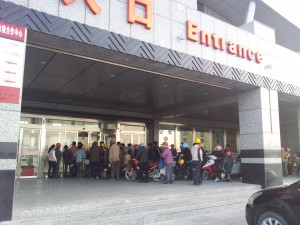 The immigration office told me that I was not allow to cycling across the border, I have to take the bus like the others people do. I have to put my bicycle inside the bus in the luggage area. It was quite crowded that time and loading the luggage was a mess.. The bus was packed with people, luckily the weather was cool, if not everyone will be sweating and the bus would be smelly. 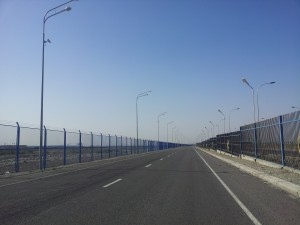 It took about 5-10 minutes to cross the border, as you can see the both side has been fence up with security force patrolling. It was really high level of security. 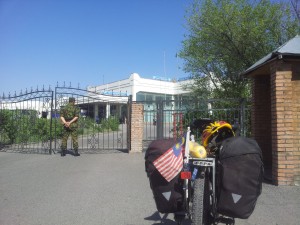 The bus stopped and people begin to unloading their stuffs from the bus. Now, I am out from China, I have stepped in the land of Kazakhstan. We were all schedule to wait outside the Kazakhstan immigration until the officer allow us to enter. I have no idea what they were saying as they don’t speak mandarin now, I was only halfly understand what they mean from their gesture signs.

Same as the others immigration office, there were strictly no camera and video. The safety guard was 7 feet tall with wrestler body. They were wearing kind of special force suite with full black and a balaclava covering their full face. Each of them carrying machine gun on their hand!! While German Shepherd dogs were chain on every access point. The whole environment was stress

I heard a lady being screened by an armed force inside a room. The screaming was loud and I think the whole immigration hall could heard it. Totally horrible, I think some children might shitting on their pants in this kind of environment and situation.

After moments of waiting, it was my turn on the immigration. I was questioned by an officer on the purpose on entering Kazakhstan. At my first thought, I would answer “travel”, but I have answer with quite naive but confident saying that “I am Malaysia, I was representing my country to cycling all the way from Malaysia to London for 2012 Olympic.

The office look at me for a second. After awhile, I was released with my bicycle and all my luggage checked and entering Kazakhstan :). Stay tuned for my exciting journey in Kazakhstan!!