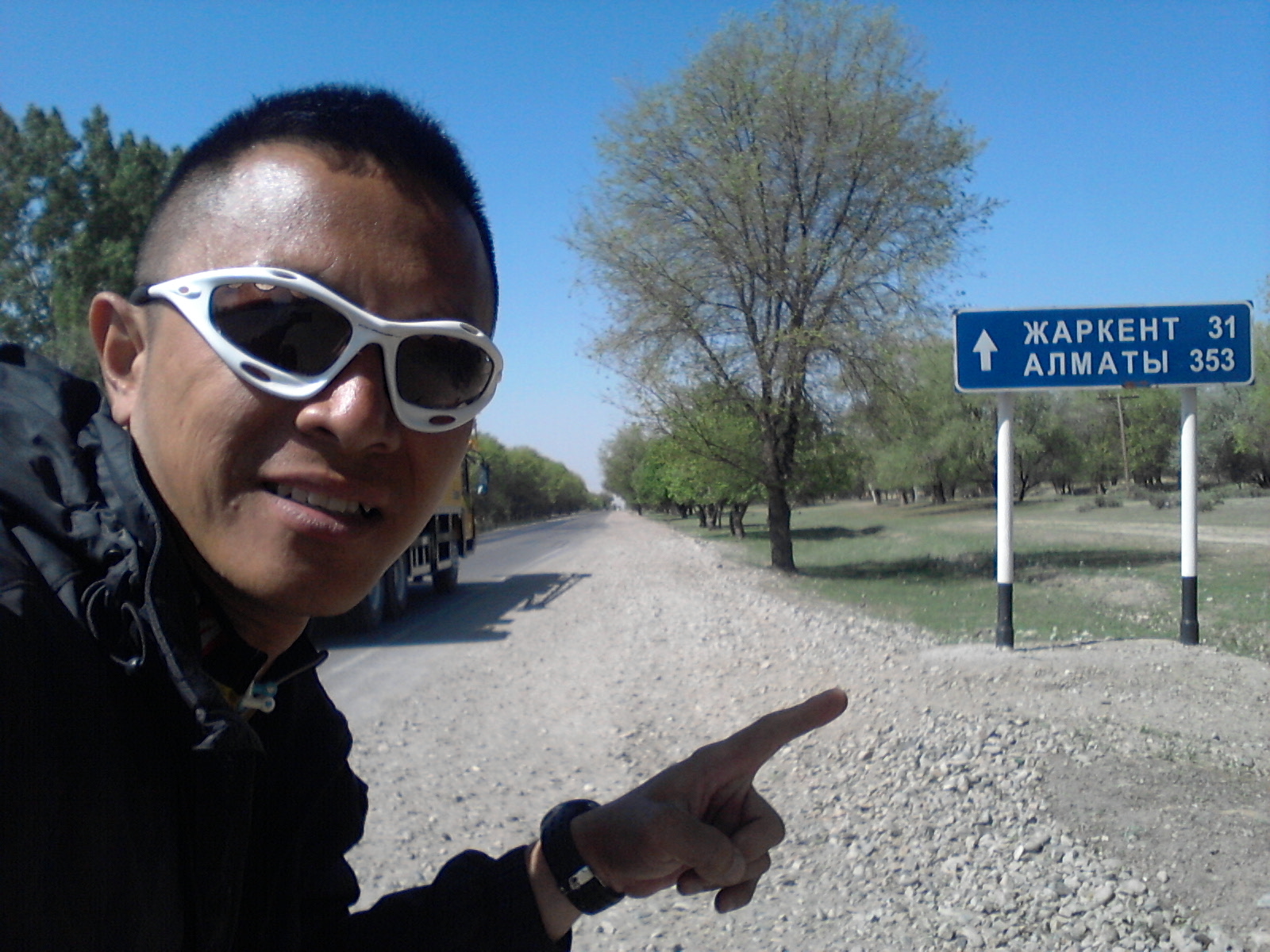 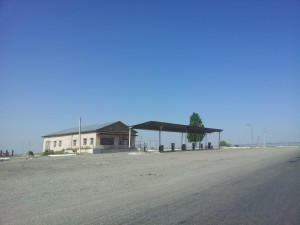 With almost 2 months travelling in China, I arrived at Kazakhstan. It was really a huge difference in term of the geographic, you can’t see the beautiful mountain road cover with snow, all you can see is a flat road toward the end. Even the soil were difference here, the weather was dry and sandy, you can’t likely saw a tree around here. I went to search online, Kazakhstan is the world largest dry steppe region and, which one third of the country was sandy regions. Wow, that’s interesting!

Kazakhstan was the ninth largest country in the world and the size was almost the same with western Europe. But the population in this country was even lesser than Malaysia, is less than 20 millions. 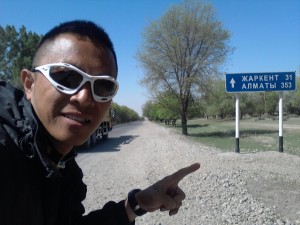 I can’t read the words in the signboard and this was my first time came across this alphabet, it was quite hard to me to find the right way for my journey. As you can see on the photo, I think it was the signboard for the distance of the destination. 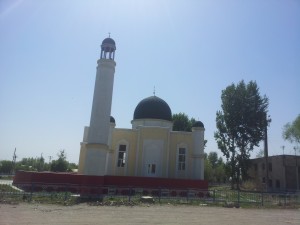 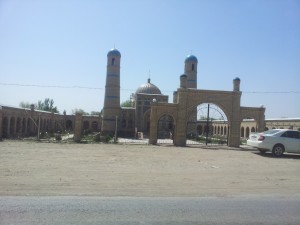 As majority population here were Muslim, you can see Mosque are everywhere. 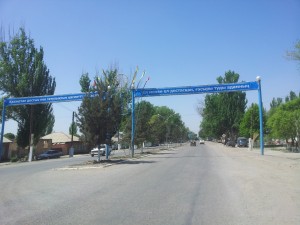 This was a new challenge for me. I travel carefully to avoid getting lost. 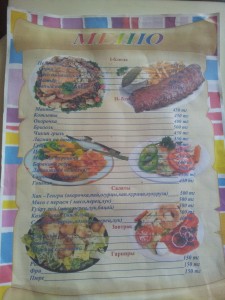 Ordering food was the real challenge for me, I can’t read the menu, I need to went to a stall that come with photo in the menu so that I could point it to order for food. Language is the first barrier for me now.

Anyway the food price are reasonable. 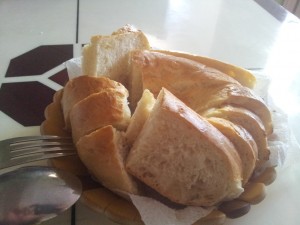 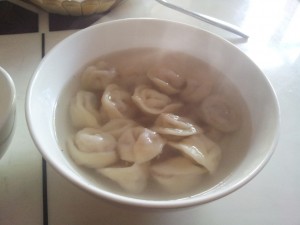 After I pointed two food in the menu, these are the food arrived, hahaha. Quite full after eating all of these. The taste was still acceptable. 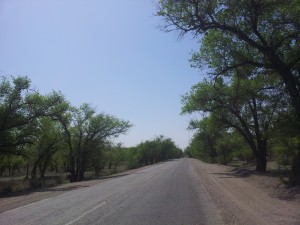 After having a late lunch and short rest, I was back on my bike to stick on my plan, 160km per day. 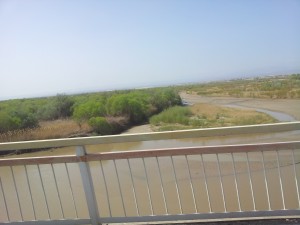 There river was brown in color and not clear compare to China. 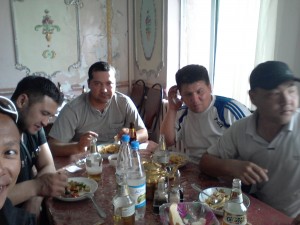 After a long ride during the whole afternoon, I found a rest stop and decided to have my dinner over here. Although is already 7pm, the sky was still bright here, just look like 5pm. There was a group of people came down from a bus and having their dinner same place with me. They were also came back from China this morning too!! I was invited to sit and having dinner with them as they saw me sitting alone with a dirty clothes and a bicycle.

They help me to order the food and I will have a good proper meal and a beer first night in Kazakhstan ? :). 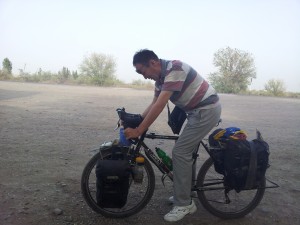 One of the passenger was curious and excited when he saw my bike, I let him to try and pedal my bike for one round but unfortunately he can’t balance it and almost felt down. Maybe is too heavy for him, HAHA? 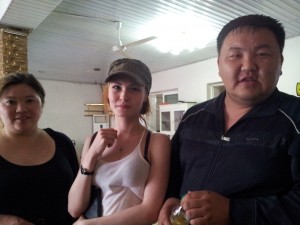 Apart from that, others passengers from the bus was curious and keep asking me where am I came from. They were shock and trying to imagine that the distance from my home until here with just riding a bicycle. 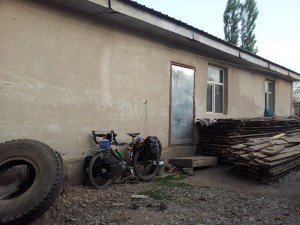 During the dinner, one of the passenger name, Madi was asking me where is my next stop. He could speak a little bit of English and I reply him that I am heading to Almaty. He was heading the same place as well and ask me to hop on the bus with them. I replied him that I prefer to cycle and this is what my main purpose. I thanks him for the offer, he even offer me to stay in his house when I reach Almaty, such a nice person.

I plan to change my initial route plan from Russia-Ukraine- Europe to crossing Caspian Sea-Azerbaijan- Armenia-Turkey-Bulgaria – Europe. Thus, I need head toward the Almaty, largest city of Kazakhstan and look for Malaysia embassy to prepare the related documents that needed.

I took down Madi numbers so that I could contact him when I reach Almaty and I wish everything goes fine. Then I rest a night in this small rest stop together with the restaurant workers. GOOD NIGHT…..