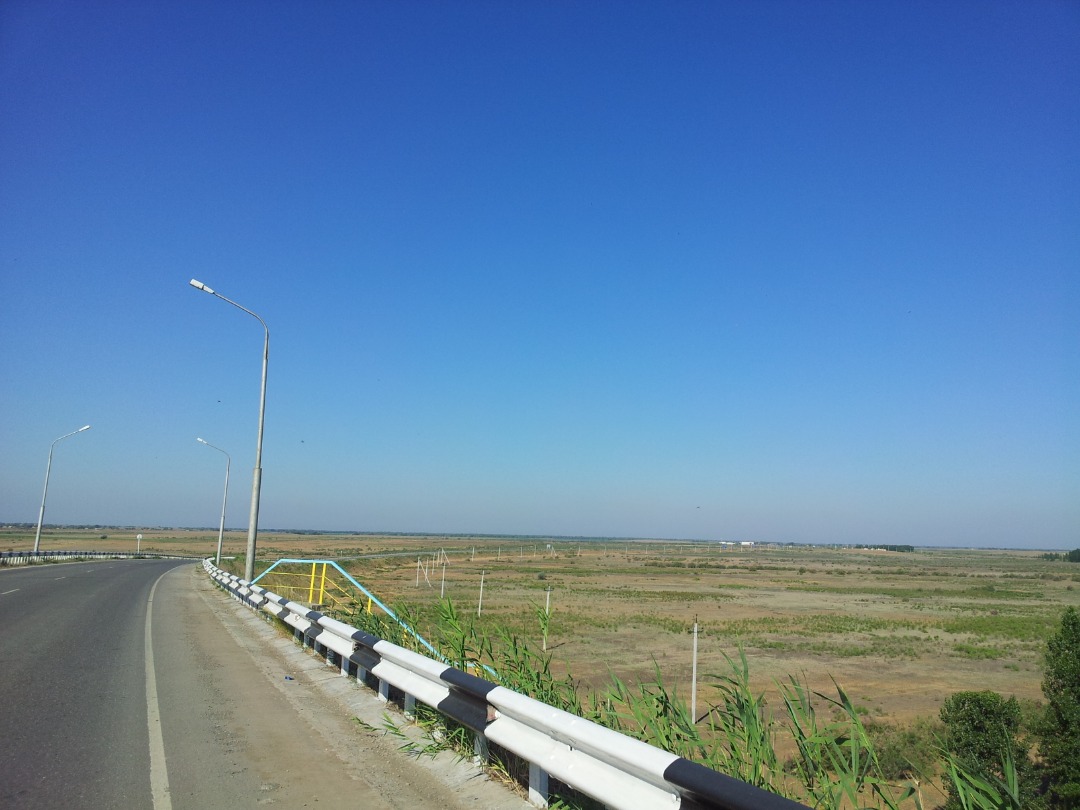 A wonderful morning with the clear blue sky after a good sleep. Today I am going to pass the Russian immigration border. I still remember how difficult it was to get the Russian visa, and in the end I only got approved for 9 days of visa!! Could you imagine, it is only 9 days! It means that I have only got 9 days to cross the world largest country to get into Ukraine, the previous part of Soviet Union. Hence, I have made sure that I had enough of rest in the last few days in Kazakhstan so that I could push to my limit to cycle as long as I can to reach Ukraine before my visa expired.

I am taking the E40 route to Astrakhan, the southern city in Russia, I think I am in the right direction. The sun rises from my back in the morning and the sunset and in front on me, it shows that I am heading west 👍

After a long ride, I believed that the immigration border was in front of me. I have done some research earlier and found out that the people mentioned that there were strictly no video or photography at the Russian border. Okay, I take this photo from far away to avoid any difficulty later.

This is the photo that I have taken after the border, I am now in Russia :). My passport has been scanned for many times to make sure that I am not carrying a fake passport? Moreover, they even use the magnifying glass to see through all of my documents. After that, I have been interviewed by the officer about my purpose for entering Russia and where I am heading to. I have to answer it calmly as I am carrying a 6 inches knife inside my backpack for cutting bread, hoping that they did not notice it and everything will be okay.

I couldn’t believe that those irritating flying insects were everywhere after I entered the border, and this situation even worse here, my head was covered with all those insects. I tried to wet my head with the water, spraying the insect repellent on my whole body, but that tiny insect was still covering my head and face. All I can do is cycle as fast as I can in order to put them behind me. I have reached the speed of 40km/h and tried to maintain the distance with them. BUT, they still can follow and catch me, they are all covering my head now, ANYONE PLEASE HELP ME, AHHHHH!!!!!

I have no time to get anyone to help along the way as I am so irritated and uncomfortable. I just want to continue to move and could not stop cycling because it will attract more to come once I stop pedalling. I wonder how the people could survive in this kind of environment. Anyway, I couldn’t see any people walking around, I think they were either staying inside the house with the door and window closed or hiding inside their car.

After 2 hours of speeding, finally I found a cafe for me to hide. This is a good shelter for me, I ran inside quickly and I hope that everything will be fine inside.

I just grabbed a seat and ordered something to calm myself down, I was exhausted. I hoped that those monster insects did not eat my bicycle that I had left outside. It is kind of strange that the insect did not fly inside the cafe, they only focus on the people who stay outside the street, especially flying around the people’s head! I wonder what they have put inside the cafe, is it some kind of special insect repellent?

The food was normal, as shown in the photo. By worrying about going out again, I was loitering inside the cafe for almost an hour after I finished my food. I am ordering more food so that I could stay longer in the cafe. All the while I was thinking how am I going to cycle in this environment, how can I kill all those insects? HAHAHA

Am I going to suffer this during these 9 days in Russia?? Hundreds thousands of the insects storm over towards my head and face once I got out from the cafe. I quickly pulled out the t-shirt and wrapped my head off like a SWAT or terrorist and put on my sunglasses so that I could cover all my head and face. However, that “insect army” was still able to get into my ears and fly around in my eyes!!

After 2 hours of riding, I have reach another cafe to have a rest after speeding on the road like I have been chasing by group of tigers, HAHA

I can’t really remember what I saw along the road, all I remembered was only those pyramids as shown in the photo. I don’t have the mood to look around as those insects are still chasing me😭😭😭, I have no idea when this nightmare will end…